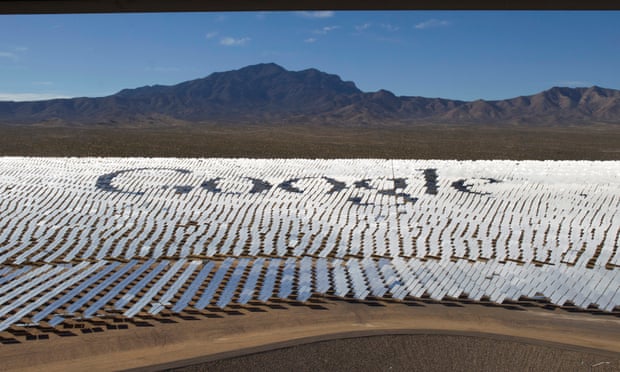 Google signs up to $2bn wind and solar investment

Sundar Pichai said the clean energy deal will include 18 separate agreements to supply Google with electricity from wind and solar projects across the world.

The search engine’s green energy portfolio will grow by 40%, giving the company access to an extra 1.6 gigawatt of clean electricity – the equivalent capacity of a million solar rooftops, the company said.

Google has become the largest corporate buyer of renewable electricity by matching the huge energy demand of its global operations and data centres with the electricity generated by renewable energy projects.

Google said it became the first company of its size to match 100% of its electricity use with renewable energy sources in 2017 after buying more than 7bn kilowatt-hours of electricity. It matched the feat again last year, and expects to meet the target in 2019 too. Once the most recent deals have been signed, Google’s supply agreements with renewable energy developers will total 5.5GW.

Pichai said the latest package of deals will “spur the construction of more than $2bn in new energy infrastructure”, including millions of solar panels and hundreds of wind turbines across three continents.

“We’re not buying power from existing wind and solar farms, but instead are making long-term purchase commitments that result in the development of new projects,” he said.

“Bringing incremental renewable energy to the grids where we consume energy is a critical component of pursuing 24×7 carbon-free energy for all of our operations,” Pichai added.

Almost half of Google’s new renewable energy investments will be made in Europe, including projects in Finland, Sweden, Belgium and Denmark.

The deal includes investment in the US states of North Carolina, South Carolina and Texas, as well as a smaller contract in South America to power a Google data centre in Chile.