Bahawalpur is a city located in the Punjab province of Pakistan. Bahawalpur is the 11th largest city in Pakistan with an estimated population of 798,509.

Founded in 1748, Bahawalpur was the capital of the former princely state of Bahawalpur, ruled by the Abbasi family of Nawabs until 1955. The Nawabs left a rich architectural legacy, and Bahawalpur is now known for its monuments dating from that period.The city also lies at the edge of the Cholistan Desert, and serves as the gateway to the nearby Lal Suhanra National Park.

Solar radiation over Bahawalpur (Pakistan) as simulated by 25 climate models from 1951 to 2100 with (RCP4.5) or without (RCP8.5) climate change mitigation policy. City solar radiation data are from a single site, corresponding to the center of a grid box. Quaid-e-Azam Solar Park is also located in Bahawalpur, which is the largest Solar Installation in Pakistan. solar-radiation bahawalpur pakistan, we have installed few solar tubewell in Bahawalpur.

Data are available in Raw (free) and Ready to use versions. Differences are illustrated below 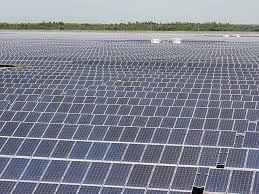 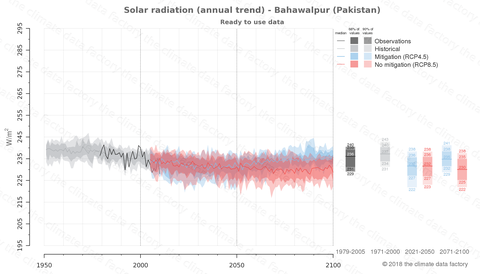 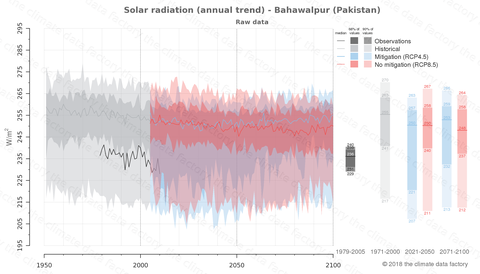