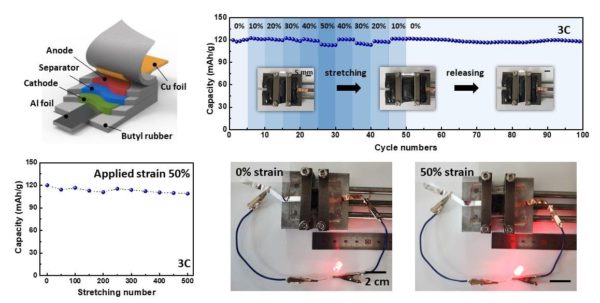 Scientists in South Korea have worked with graphene and carbon nanotubes to develop a working lithium-ion battery that can be stretched by up to 50% without damage to any of the components. According to the scientists, the battery represents a significant step in the development of wearable or body-implantable electronic devices.

Integrating electronics – and therefore energy generation or storage – into all sorts of devices is a fast-moving area of research, and one that places new and often strange requirements on electronic materials, by designing batteries that can be worked into clothing or other fabrics, for example.

Scientists at the Korea Institute of Science and Technology (KIST) had applications such as this in mind as they developed a lithium-ion battery with components that could be stretched by up to 50% without compromising on safety or performance.

Rather than trying to add inherently stretchable materials such as rubber to the battery components, the group focused on creating an “accordion-like” structure, adding stretchability to materials that are not inherently stretchable. Using graphene and carbon nanotubes, the scientists were able to construct a honeycomb-shaped composite framework, which was then compressed inwardly like an accordion to impart the stretchable properties.

They then combined the electrodes with a gel electrolyte and stretchable packaging materials to create a working lithium-ion battery. The design, described in the paper Stretchable Lithium-Ion Battery Based on Re-entrant Micro-honeycomb Electrodes and Cross-Linked Gel Electrolyte, published in ACS Nano, demonstrated a capacity of 5.05 milliamp hours per square centimeter, maintaining 95.7%  of this performance after 100  charge-discharge cycles. The battery also exhibited “superior electrochemical performance,” according to KIST, after 500 stretch-release cycles when the material was stretched up to 50%.

The university notes that all of the materials within the battery are active in the battery, with the stretchable properties added as a bonus. Jeong Gon Son, who led the research at KIST, says that he expects the stretchable design to “present a new paradigm in terms of stretchable energy storage systems for the further development of wearable and body-implantable electronic devices.”