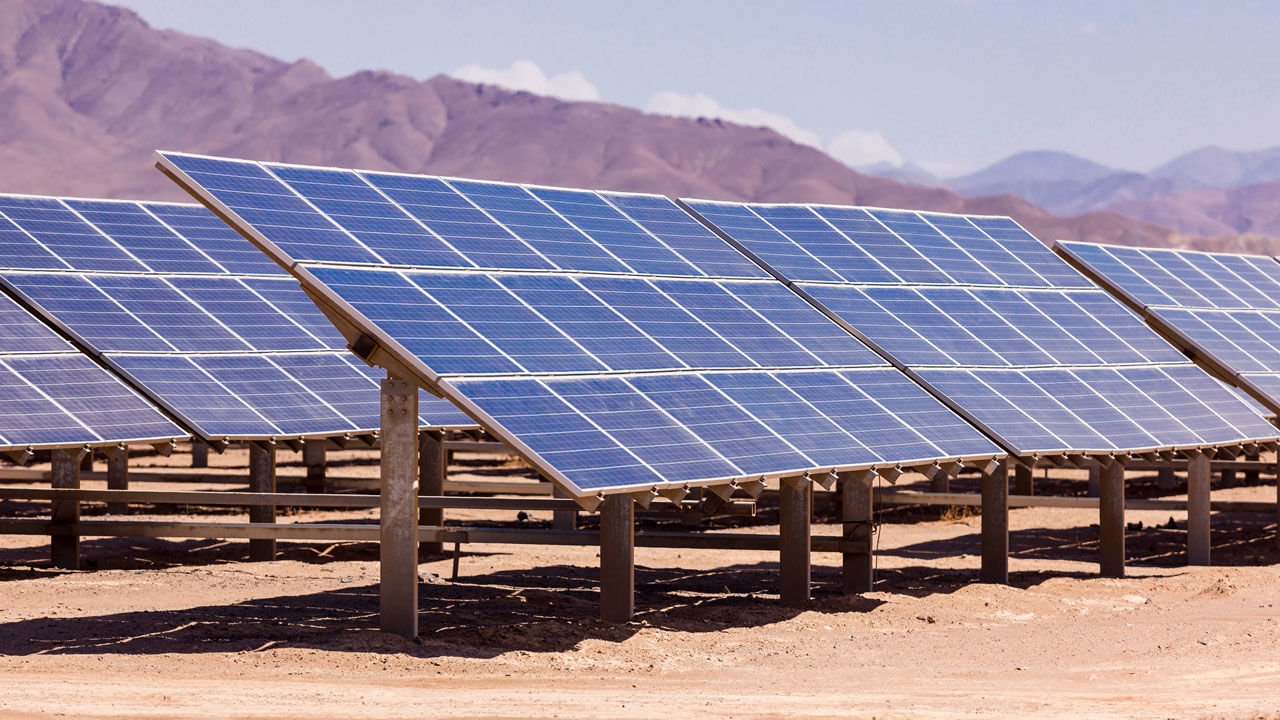 New solar panels suck water from air to cool themselves down

Like humans, solar panels don’t work well when overheated. Now, researchers have found a way to make them “sweat”—allowing them to cool themselves and increase their power output.

Solar Panels in Atacama Desert, ChileToday, more than 600 gigawatts of solar power capacity exists worldwide, providing 3% of global electricity demand. That capacity is expected to increase fivefold over the next decade. Most use silicon to convert sunlight to electricity. But typical silicon cells convert only 20% of the Sun’s energy that hits them into current. Much of the rest turns into heat, which can warm the panels by as much as 40°C. And with every degree of temperature above 25°C, the efficiency of the panel drops. In a field where engineers struggle for every 0.1% boost in power conversion efficiency, even a 1% gain would be an economic boon, says Jun Zhou, a materials scientist at Huazhong University of Science and Technology.

Decades ago, researchers showed that cooling solar panels with water can provide that benefit. Today, some companies even sell water-cooled systems. But those setups require abundant available water and storage tanks, pipes, and pumps. That’s of little use in arid regions and in developing countries with little infrastructure.

Enter an atmospheric water collector. In recent years, researchers have devised materials that can suck water vapor from the air and condense it into liquid water for drinking. Among the best is a gel that strongly absorbs water vapor at night, when the air is cool and humidity is high. The gel—a mix of carbon nanotubes in polymers with a water-attracting calcium chloride salt—causes the vapor to condense into droplets that the gel holds. When heat rises during the day, the gel releases water vapor. If covered by a clear plastic, the released vapor is trapped, condenses back into liquid water, and flows into a storage container.

Peng Wang, an environmental engineer at Hong Kong Polytechnic University, and his colleagues thought of another use for the condensed water: coolant for solar panels. So, the researchers pressed a 1-centimeter-thick sheet of the gel against the underside of a standard silicon solar panel. Their idea was that during the day, the gel would pull heat from the solar panel to evaporate water it had pulled out of the air the previous night, releasing the vapor through the bottom of the gel. The evaporating water would cool the solar panel as sweat evaporating from the skin cools us down.

The researchers found that the amount of gel they needed depended primarily on the environment’s humidity. In a desert environment with 35% humidity, a 1-square-meter solar panel required 1 kilogram of gel to cool it, whereas a muggy area with 80% humidity required only 0.3 kilograms of gel per square meter of panel.

The upshot in either case: The temperature of the water-cooled solar panel dropped by as much as 10°C. And the electricity output of the cooled panels increased by an average of 15% and up to 19% in one outdoor test, where the wind likely enhanced the cooling effect, Wang and his colleagues report today in Nature Sustainability.

“The efficiency increase is significant,” Zhou says. But he points out that rain could dissolve the calcium chloride salt in the gel, sapping its water-attracting performance. Wang agrees, but notes the hydrogel sits beneath the solar panel, which should shield it from rain. He and his colleagues are also working on a second-generation gel that shouldn’t degrade, even when wet.

Another design option, Wang says, is a setup that could trap and recondense water after it evaporates from the gel. That water, he says, could be used to clean any dust that accumulates on the solar panels, solving a second power-sapping problem at the same time. Alternatively, that same water could be stored for drinking, addressing another desperate need in arid regions.