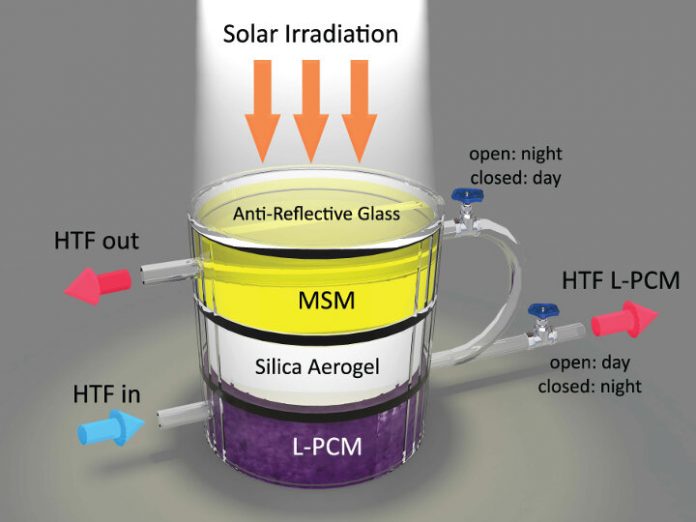 The hybrid device consists of a molecular storage material (MSM) and a localized phase change material (L-PCM), separated by a silica airgel to maintain the necessary temperature difference. Credit: University of Houston

Researchers from the University of Houston have reported a new device that can efficiently collect and store solar energy until needed, which is promising for applications ranging from power generation to distillation and desalination.

Unlike solar panels and solar cells, which depend on photovoltaic technology for the direct generation of electricity, the hybrid device captures heat from the sun and stores it as thermal energy. It addresses some of the problems that have stopped using solar energy on a larger scale, and suggests a way to use solar energy 24 hours a day, despite limited hours of sunlight, cloudy days and other restrictions.

The work described in a paper published Wednesday in Joule, combines molecular energy storage and latent heat storage to produce an integrated harvest and storage device for potential 24/7 operation. The researchers report a harvest efficiency of 73% for small-scale use and up to 90% for large-scale operation.

Up to 80% of the stored energy was recovered during the night and the researchers said the recovery during the day was even higher.

Hadi Ghasemi, Bill D. Cook Associate Professor of Mechanical Engineering at the UH and a corresponding author for the paper, said the high efficiency harvest is partly due to the device’s ability to capture the full spectrum of sunlight and harvest for immediate use and convert the surplus into storage of molecular energy.

The device was synthesized using norbornadiene-quadricyclane as the molecular storage material, an organic compound that, according to the researchers, exhibits high specific energy and exceptional heat release while remaining stable over longer storage times. Ghasemi said the same concept could be applied using different materials, thereby optimizing performance – including operating temperatures and efficiency.