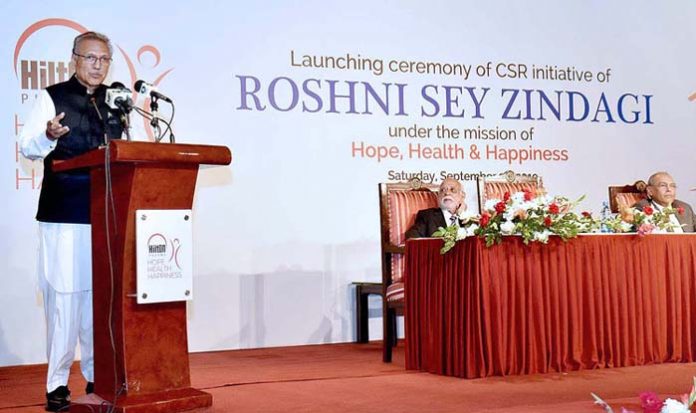 President to focus on producing solar panels in country

KARACHI, Sep 28 (APP):With Pakistan fast emerging as a major user of solar energy, President Dr. Arif Alvi on Saturday stressed the need to focus on bringing down the cost of the safest source of energy by producing solar panels in the country.

Addressing here the launching ceremony of Hilton Pharma’s CSR initiative Solar Energy Project to electrify 10,000 households across the country, he said Pakistan that had emerged the fifth largest market for solar energy, needed to make optimum use of the safest source available in abundance (in form of sun light).

According to the National Electric Power Regulatory Authority (Nepra)’s statistics for last month, hydel power production had a significant contribution to the country’s total energy mix.

Industry experts are welcoming this achievement for various reasons:

1. It is a renewable energy source.

3. It reduces the burden on the country’s import bill.

The improvement in hydroelectric power production has been possible due to persistent rain and induction of new plants into the system including Neelum-Jhelum and Tarbela Dam’s 4th Extension project, Rao Amir Ali an industry expert said.

According to him, the share of hydroelectric power in the total electricity generation touched an all-time at 40% in August. Last month’s overall power generation was 14,052 GWh as compared to 14,017 GWh August 2018. The expert added.