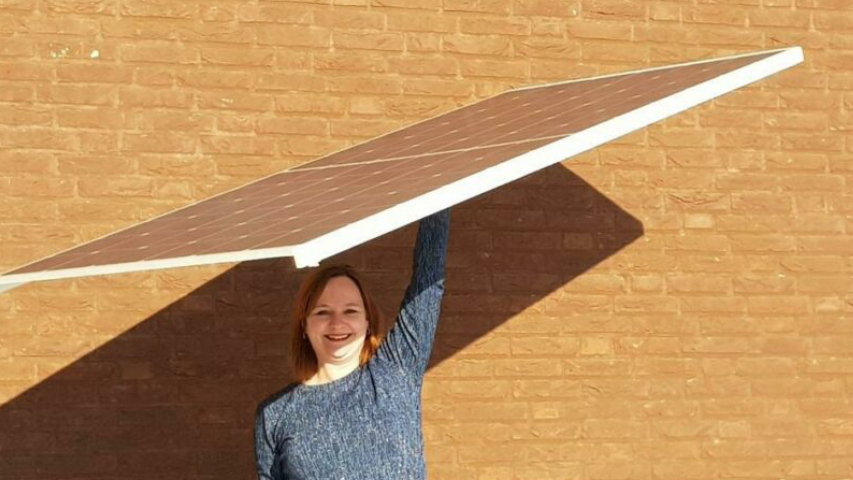 The solar panels of Solarge from Eindhoven are so light that many more can be placed on a roof than is currently the case.

For a long time, this was considered impossible because plastic does not behave in the same way as glass. But with Dutch plastic expertise, it worked. And now the start-up Solarge is on the verge of mass-producing lightweight solar panels. That could be a revolution, especially for rooftop solar. “There could be an additional hundred square kilometers of solar roof,” says Solarge.

Here is a solar panel that weighs half as much as a normal one, but otherwise works exactly the same. It is produced entirely sustainably and, because of its lower weight, can be installed on any roof. This also applies to the roofs of businesses such as distribution centers and others that are often not so strong. These panels also emit 80% less CO2.

That may sound too good to be true, but it is exactly what the company Solarge envisions. The twelve people at this start-up in Eindhoven are working hard to have a factory-ready solar panel by Spring 2022 that can produce 500,000 square meters of solar panels annually. That’s quite an ambition for a company that has only been around for a few years.

When Gerard de Leede, Chief Technology Officer at Solarge, first heard about plastic solar panels, he was skeptical. “The Dutch part of SABIC, formed from parts of DSM and GE, had developed a plastic that could replace glass in solar panels.” This was due to a combination of the right plastics and clever additives that made it as transparent and sturdy as glass. De Leede was chief technology officer of the Heijmans construction company at the time. On closer inspection, he came to the conclusion that it was a promising and groundbreaking development. “A lot of homework had been done back then,” he recalls during an online interview. “They knew the possibilities, and they wanted to apply it once in practice – that’s what they came to Heijmans for.”

Soon De Leede recognized that a link was missing. The basis for the plastic had been developed by SABIC, Heijmans could apply it – but who would make the lightweight solar panels from it? Solarge was born.

De Leede and co-founders Huib van den Heuvel and Jan Vesseur raised venture capital, supplemented by grants and loans. “After three years, we are now ready to build a larger factory. The technology works and we can produce on a large scale.” With that, according to De Leede, we are thus on the eve of a major change in the world of solar panels.

While De Leede was skeptical at first, he is now the biggest advocate of lightweight panels. “You open up so many possibilities with this. Solar power on roofs is indispensable for generating enough sustainable electricity and many roofs are still unused. By making the panels 50 percent lighter, you can invest an additional 100 square kilometers of roof with panels in one fell swoop. “Those are roofs that don’t have enough solid roof structures for conventional solar panels, as most residential buildings do. Think about commercial buildings that have bitumen as a roof covering. Or plastic roof layers, or buildings with pitched roofs made of curved metal sheets.”

This sturdy plastic gives Solarge an edge over the competition, according to De Leede. “There are other lightweight panels out there. But these are of inferior quality and do not last as long. Plus, some of them, especially from China, contain PFAS. That can cause big problems if it catches fire. Think of a barn fire, where there are panels on the barn. That’s very dangerous.”

But aside from the danger, it’s the quality that should justify the somewhat higher cost of Solarge’s panels. “In the beginning, they will cost a bit more than conventional panels from China. Fortunately, we have a market where there is hardly any competition: all the existing buildings that cannot accommodate standard solar panels. We’ll be busy investing in those for a while.”

But what about the future? We are already seeing new commercial buildings being fitted with solar panels as standard. Think of distribution centers and data centers. De Leede says: “For such panels, you need to install a more solid roof, often with steel reinforcement. Steel creates extra CO2. If you can make your roof light and cheaper and still install solar panels, that saves money.”

The most sustainable solar panels in the world

Yet De Leede doesn’t necessarily seem to be concerned about the cost. When he talks about Solarge’s future plans, it becomes clear what this Dutch solar manufacturer wants: to make the most sustainable panels on earth. “Initially, we will still get the solar cells from China, after which we will coat them with plastic ourselves. But in time we want responsible, low carbon solar cells. These already exist and are made in Norway using hydropower. Today they are still much more expensive, but in the future, EU rules and border taxes will ensure a more level playing field. Then it will be possible to make solar panels with extremely low CO2 emissions at a competitive price.”