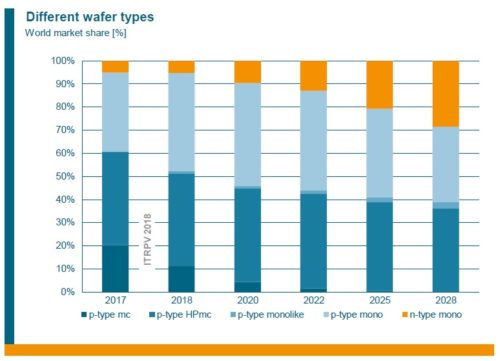 The average solar buyer probably isn’t paying attention to whether solar panels are made with p-type or n-type solar cells. There are more important things to worry about, like power output and aesthetics. But in case anyone was wondering what those letters mean and how they may affect solar panel buying in the future, here’s a crash course on the science behind solar cells.

First, a conventional crystalline silicon (c-Si) solar cell is a silicon wafer doped with various chemicals to encourage power production. The main difference between p-type and n-type solar cells is the number of electrons. A p-type cell usually dopes its silicon wafer with boron, which has one less electron than silicon (making the cell positively charged). An n-type cell is doped with phosphorus, which has one more electron than silicon (making the cell negatively charged).

The difference between n-type and p-type solar cells

Although the first solar cell invented by Bell Labs in 1954 was n-type, the p-type structure became more dominant due to demand for solar technologies in space. P-type cells proved to be more resistant to space radiation and degradation. Since so much research was thrown into space-related solar technology, it was only natural that p-type cell dominance trickled down to the residential solar market.

But more solar manufacturers are adopting n-type structures because of their additional benefits. For one, since n-type cells use phosphorus instead of boron, they are immune to boron-oxygen defects, which cause decreased efficiency and purity in p-type structures. N-type cells are in turn more efficient and are not affected by light-induced degradation (LID).

The International Technology Roadmap for Photovoltaic (ITRPV) predicts that the market share of p-type mono-c-Si will hold around 30% through 2028, while n-type mono-c-Si will increase to about 28% from barely 5% in 2017. This correlates to the industry demand for more high-efficiency modules, so solar buyers can expect more n-type designs entering the mainstream.

The R&D behind both cell types is strong. While n-type solar cells may be more efficient at a surface-level, outputs on both types can be similar. Some examples to compare: