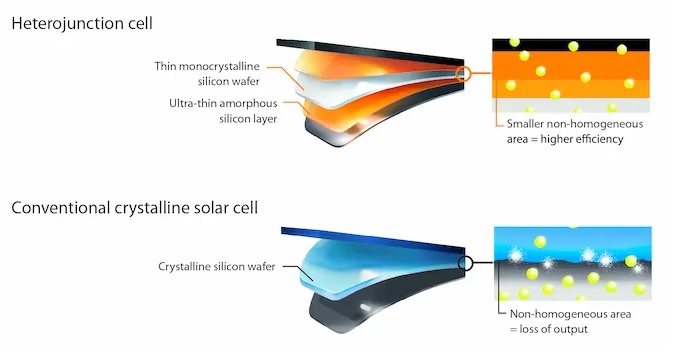 Meyer Burger has accelerated plans to target the US high-end residential rooftop market with its heterojunction (HJ) PV modules.

Having been buoyed by the Biden presidency’s early support for solar as part of plans for the country to reach 100% carbon-free electricity generation by 2035, while also supporting green policies for economic recovery post-pandemic, Meyer Burger said it would enter the US market in 2021, compared to previous plans of market entry sometime in 2022.

Meyer Burger is on target to start initial manufacturing operations for both its HJ solar cells and module assembly in Germany in the May/June period, with shipments expected to start in June/July after full module certifications are achieved.

Initially, Meyer Burger planned to focus on the European market in 2021, having only 400MW of annual nameplate capacity but a well-known distribution network and established demand for ‘German’-made PV modules, as well as an established high-end residential rooftop market seeking high-performance products.

Initial “substantial” US orders and shipments to the US are now also expected in 2021, according to Meyer Burger.

The supply of high-end performance modules to the US residential rooftop market is dominated by SunPower, LG, Panasonic and REC Solar. Although, long-standing player SunPower only achieved sales of around 390MW in the US in 2020.

Meyer Burger still plans to increase annual capacity to 1.4GW of cell and 0.8GW of module production in 2022. This is dependent on the company raising around CHF180 million (US$ 194.5 million) of debt by the start of 2022.

Having raised funds in 2020 to transition to a PV module manufacturer, Meyer Burger ended the year with a net cash position of CHF139.7 million.

What is a heterojunction solar cell?

In the quest for better solar cell efficiency, manufacturers keep deploying new technologies, and heterojunction cells is one of the latest.

What is heterojunction solar?

The most common type of solar panels are made with crystalline silicon – either monocrystalline or polycrystalline. The silicon crystals are grown into blocks and then cut into thin sheets, often using a diamond wire saw, to form individual cells.

A less common type of photovoltaic cell is thin film, which is made with a variety of materials, one of which is amorphous silicon. Unlike crystalline silicon, amorphous silicon does not have a regular crystalline structure. Instead, the silicon atoms are randomly ordered. For manufacturing, this means that amorphous silicon can be deposited onto a surface – a simpler and less expensive process than growing and cutting silicon crytals.

By itself, amorphous silicon is less efficient at converting sunlight into electricity. However, it does have the benefit of less costly manufacturing. This lower cost and flexibility in the type of materials that amorphous silicon can be deposited on are a couple important advantages.